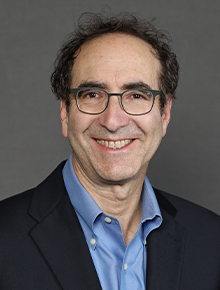 Jeffrey S. Klein, MD, is the Radiological Society of North America (RSNA) Board Liaison for Publications and Communications.

Dr. Klein is the A. Bradley Soule and John P. Tampas Green and Gold Professor of Radiology at the University of Vermont College of Medicine. A renowned expert in lung cancer staging and detection, Dr. Klein served as editor of RadioGraphics 2012-2021.

Dr. Klein held several leadership positions with the Society of Thoracic Radiology (STR), including as president from 2005 to 2006. He served on the American College of Radiology committee on CT accreditation from 1998 to 2008, and as an examiner for the American Board of Radiology.

He was part of an expert panel convened by the U.S. Department of Justice regarding the Radiation Exposure Compensation Act of 1990, a group that developed a protocol for high-resolution CT examinations of Navajo uranium miners.

Esteemed for his dedication to radiology education, Dr. Klein has received teaching awards from the UCSF Medical Center, the University of Vermont College of Medicine and SUNY Downstate.

From 2001 to 2005, Dr. Klein represented Vermont on the American College of Chest Physicians Council of Governors, and from 2002-2010, he was a member of the Data Safety and Monitoring Board for the Lung Cancer Screening Trial of the National Cancer Institute. He was elected to membership in the Fleischner Society for Thoracic Imaging and Diagnosis in 2011.

Dr. Klein is a member of the RSNA Publications Council, and Board liaison to the RSNA/ACR Image Wisely Committee, RSNA/ACR Public Information Website Committee and the RSNA Residents and Fellows Committee. He recently concluded service on the RSNA COVID-19 Task Force.

From 1993 to 1995, Dr. Klein was a clinical associate professor, chief of thoracic imaging and associate director of the residency training program in the Department of Radiology at St. Joseph’s Hospital and Medical Center in Phoenix. He then joined the University of Vermont College of Medicine, where he served as vice-chair of the Department of Radiology from 1998 to 2000 and chief of thoracic imaging from 2000 to 2010. Dr. Klein was named to the endowed professorship in 2006. From 2005 to 2010, he served as Associate Dean for Continuing Medical Education at the University of Vermont College of Medicine.