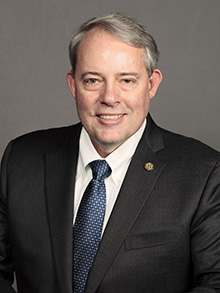 Mark G. Watson has served as RSNA Executive Director since 2009. With over 30 years’ experience working in various capacities at RSNA, Mark has a deep knowledge of all activities of the organization and how they align with its mission.

After graduating from Western Illinois University with a bachelor's degree in business and accounting, Mark began his career in 1986 at KPMG Peat Marwick. In 1990, he was hired as the RSNA director of finance and within a few years was promoted to assistant executive director of finance and administration. During that time, he was responsible for human resources and all membership, business, financial and accounting activities. His work involved developing long-term financial forecasting to help move the board's strategic plans and decisions forward. In 2005, after working closely with a variety of governing boards and committees of radiological societies, Mark was appointed director of the RSNA R&E Foundation. And, in 2008, he served as RSNA's interim executive director.

During his tenure as Executive Director, RSNA has experienced growth in its membership (over 53,000) and annual meeting attendance (over 50,000). The Society continues to expand its offerings, including the launching of 3 new journals in 2019—Radiology: Artificial Intelligence, Radiology: Cardiothoracic Imaging and Radiology: Imaging Cancer and the RSNA Case Collection in 2020.

Mark was born in Iowa and has lived in the Chicago area since 1988. He and his wife, Annamarie, have been married for over 30 years and have two children, Bella and Matt.